This week my travels found me sailing the clear blue waters of the Lake Worth Lagoon in Palm Beach, on a boat with hundreds of top-producing agents from the Berkshire Hathaway HomeServices network. It was an ideal day complete with warm ocean breezes, South Florida sunshine and of course, great company.

The cruise was part of the Berkshire Hathaway HomeServices Summit Conference, an annual event (held this year at The Breakers Hotel in Palm Beach) to celebrate the achievements of our award-winning agents. And it was only by coincidence that among conversations about the bright future ahead for these top performers, I was immediately reminded of the past as our boat took a turn and I caught a glimpse of Peanut Island across the way.

“Change is the law of life. And those who look only to the past or present are certain to miss the future.” – John F. Kennedy

Now, if you didn’t already know, I’m a huge fan of American history and of the brilliant leaders—like General George Patton, President Abraham Lincoln and President John F. Kennedy—who made our country the great nation it is today. 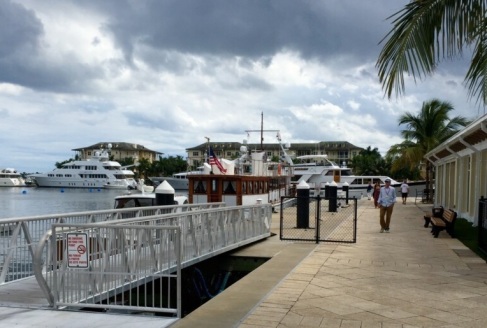 The Honey Fitz, John F. Kennedy’s presidential yacht, (with the American flag) was docked in the harbor when we sailed in Palm Beach this week.

So, here’s your quick history lesson about Peanut Island, a small, man-made landmass produced in 1918 with material dredged to create the Lake Worth Inlet in Palm Beach: If you visit the island now, you’ll find it’s been converted to the Palm Beach Maritime Museum. However, during the Cold War, when many thought the world might end at the push of one big, red button, Peanut Island served as a nuclear blast shelter for President John F. Kennedy. Kennedy often spent winters at his estate in Palm Beach (with frequent trips on his yacht, the Honey Fitz, pictured at left). In late December 1961, shortly after he was elected president, it was decided that a fallout shelter was needed near his Florida homestead. (The fallout shelter that was eventually built was only a few hundred yards from a Coast Guard station, five minutes from the Kennedy estate by helicopter and 15 minutes by boat.)

Over the course of just two weeks, a top-secret mission was conducted to erect a 1,500-square-foot bunker complete with a decontamination room, Geiger counters that could detect radiation and a ham radio to communicate with the world beyond.

For three years, the bunker remained operational, stocked with enough food to sustain 30 people for 30 days and (ironically) water in lead-lined cans. It wasn’t until Kennedy’s assassination in 1963 that the bunker was abandoned and it would remain untouched until the 1990s when the city of Palm Beach decided to turn it into a tribute to the Cold War.

So, what’s the message? Some leaders tend to focus only on the future, paying attention just to the “what’s up ahead” view they can clearly see. But leadership isn’t a surface endeavor; it goes much deeper than that. Because true leadership means understanding that even when you’re faithfully focused on the future, it’s always important to keep a vigilant eye on the rich lessons that can be learned from the past.

6 responses to Thoughts on Leadership: Peanut Island And A Trip To the Past