This week my travels find me in Southern California for staff meetings and our third-annual HSF Affiliates Sunshine Kids FunRun, taking place tomorrow in Irvine. I’m looking forward to attending the event and raising money for an incredible organization that provides positive activities and emotional support for young cancer patients. There is no greater feeling than giving back to those who deserve it most and doing something not for your own benefit but for the sole benefit of others.

And speaking of giving back, this past week we lost one of the all-time greatest givers, a fighter, a hero, a leader, a legend … Muhammad Ali. In 1964 when Ali emerged victorious in his fight against famed American boxer Sonny Liston, Ali raised his arms high into the air, smiled as big as anyone could possibly smile and announced, “I shook up the world!”

He was right and would continue to be right for decades to come, shaking up the world with his bold fearlessness, his vivacious spirit and his persevering drive. Of course we know Ali “floated like a butterfly, stung like a bee” but he wasn’t just the physical embodiment of grace and pain … he was a man true to his word, who backed up everything he said with the grit and victory to keep on saying more. Isn’t that the greatest quality a leader can possess, the ability to not only say something but then follow through every time with a knockout punch? Here are five quotes from the eloquent, fondly remembered fighter to illuminate, invigorate and inspire you today:

“It isn’t the mountains ahead to climb that wear you out; it’s the pebble in your shoe.” As Og Mandino once said, “I remember the pain, so harsh I could hardly walk, and recall my surprise when I removed my shoe and found only a grain of sand.”

‘”Don’t count the days. Make the days count.” Be grateful for every moment and take every moment for what it is: an opportunity to win whatever battle you’re fighting then move on to the next one and repeat the same thing over again.

“Service to others is the rent you pay for your 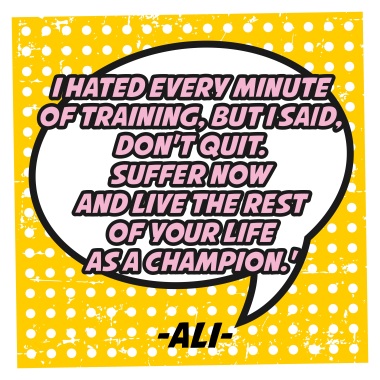 room here on earth.” When altruism meets selfishness in the ring, altruism wins every round, every time.

“I run on the road, long before I dance under the lights. I hated every minute of training, but I said, “Don’t quit. Suffer now and live the rest of your life as a champion.” The pain of discipline weighs ounces, the pain of regret weighs tons. Also, there are two things we know to be true about success: 1. You have to pay full price and 2. you have to pay in advance.

So, what’s the message? Let’s take this one from a man who will always be remembered not just for challenging the status quo, dancing around the ring with conventionality or taking a few jabs at what others said could not done but for taking it all down … fighting.

One response to Thursday Thoughts on Leadership: Butterflies, Bees and Sunshine