This week my travels found me on Monday in Northern California, on Tuesday through Thursday at noon in Minneapolis and now, as I write this on Thursday afternoon, in New York City. But let’s get back to Monday when, ironically I was in my beach house, the Capitola home once belonging to my partner and great pal, Dwight “The Catch” Clark. It was there I received the tragic news from Dwight’s wife, Kelly, that he lost his battle with amyotrophic lateral sclerosis (ALS) and had passed on.

While in Minneapolis for the HomeServices of America, Inc. CEO meeting, I was greeted with hugs from colleagues and endless condolences from those who knew of my close friendship with Dwight, including many who had met him at our Sales Conventions in 2015, 2016 and 2017.

To say Dwight inspired me almost doesn’t do the word justice. He helped me understand the kind of selfless, determined and generous human being every great leader should be. I was lucky enough to witness his incredible charity work with the Intero Foundation and the Sunshine Kids, and well before that to be a San Francisco 49ers fan in the 1980s and watch Dwight play for my favorite team. 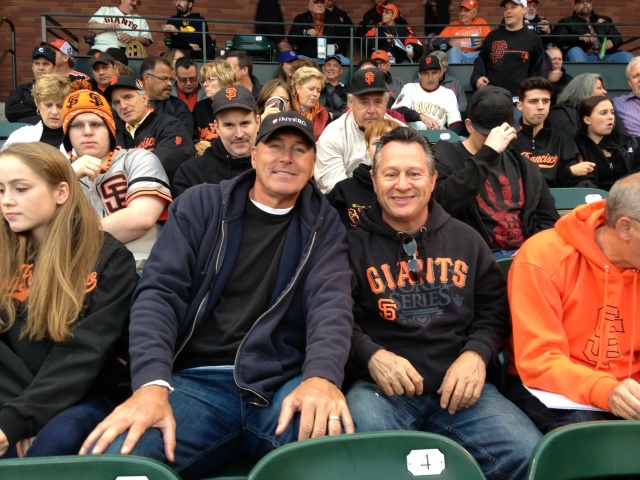 Dwight is best known as a five-time Super Bowl champion—two wins as a player and three in 49ers management—but who can say if his great run would’ve ever happened if it wasn’t for that incredible Sunday in January of 1982 … That’s when “Too Tall” Jones and what seemed like the entire Dallas Cowboys’ Doomsday Defense was chasing quarterback Joe Montana and Dwight was trying to lose Cowboys’ defensive back Everson Walls across the back of Candlestick Park’s end zone. What happened next has since been memorialized in sports history books: Dwight caught the winning touchdown pass thrown by Montana and the “upstart” 49ers won the NFC Championship Game that year. The play vaulted San Francisco into Super Bowl XVI two weeks later in which the 49ers beat Cincinnati.

“It’s a madhouse at Candlestick,” yelled famed announcer Vin Scully over the roar of an electrified crowd.

Today, “The Catch” is considered the #7 most memorable play in the NFL and #1 for the 49ers, although many football insiders call it the most significant play in the sport, ever.

“Start of a dynasty,” described Carmen Policy, former president of the 49ers.

Arms outstretched, leaping like Hercules, Dwight really was the image of impossible possibility, a winner unlike any other and not just because of his mettle but also because of his might. Dwight’s unstoppable mindset touched so many, and that is never more evident now that he’s no longer with us, in the words and photos shared across the world to commemorate our beloved hero.

On Twitter, former 49ers quarterback Joe Montana called him a “vibrant, charismatic soul.” And writing on behalf of him and his wife, Montana said, “We are grateful for the decades of love and friendship we shared.” 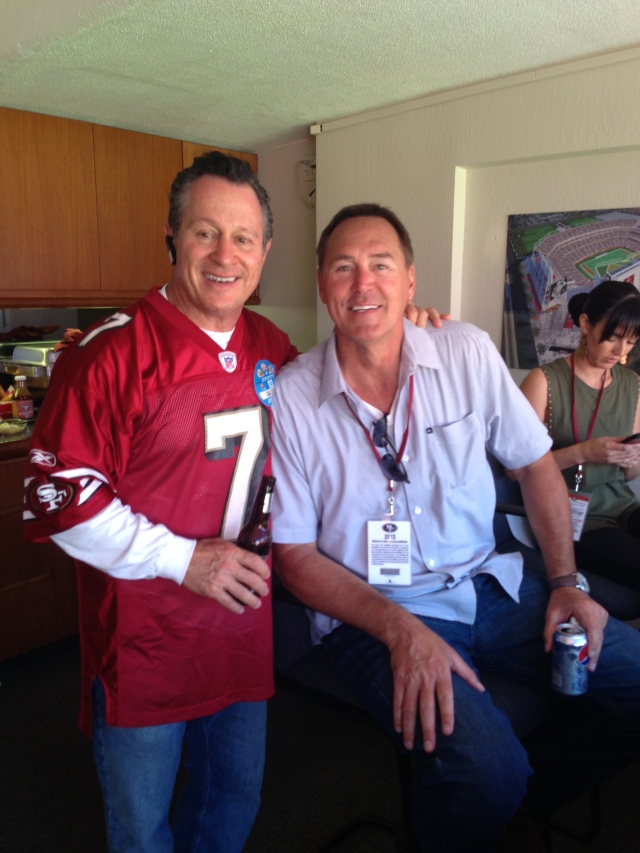 Eddie DeBartolo, former owner of the 49ers–considered the greatest owner of any sports franchise who was by Dwight’s side right until the very end–posted that his “heart is broken.” He wrote: “Today, I lost my little brother and one of my best friends, I cannot put into words how special Dwight was to me and to everyone his life touched. He was an amazing husband, father, grandfather, brother and a great friend and teammate. He showed tremendous courage and dignity in his battle with ALS and we hope there will soon be a cure for this horrendous disease …” 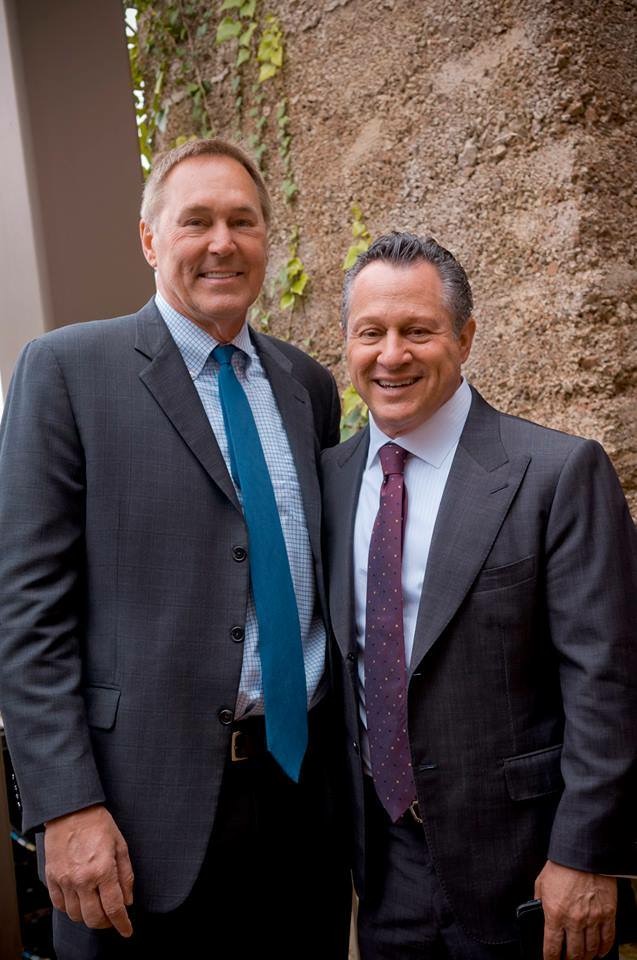 ESPN’s Tony Grossi described Dwight as “always an optimistic person,” and Cris Collinsworth, former wide receiver for the Cincinnati Bengals said, “Dwight Clark may have been the most humble star the NFL has ever produced. Yes he was fun and funny, but Dwight had an innate goodness to him that will never be forgotten by those who had the good fortune to know him.”

(A note on Collinsworth’s words: In our real estate industry, as in the NFL, where we also celebrate and salute success and where personal promotion is a staple of many of our marketing campaigns, we all should, including me, never forget Dwight for his humility. His modesty is perhaps more than any other human quality what endeared my dear friend to all who knew him.)

Gil Brandt, former vice president of player personnel for the Dallas Cowboys, tweeted, “I was on the sidelines for The Catch. Eight years later at [Super Bowl XXIV] after SF beat DEN 55-10, I waited for [a] taxi back to [the] hotel. One pulls up, window rolls down. ‘Get in Gil!’ It was Dwight Clark. I told him how he broke my heart. We laughed. All was good between us. Dwight made sure of it.”

On Instagram, Tom Brady, All-Pro quarterback of the New England Patriots, wrote: “Dwight Clark was one of my idols growing up in San Mateo. I was lucky enough to be at the game where my hero Joe Montana perfectly placed the game winning throw/catch to Dwight in the corner of the end zone to beat the Cowboys … I was 4 years old and cried to my parents the entire first half because I couldn’t see the field when the grownups would stand and scream for the 49ers. I got a chance to meet [Dwight] when we happened to share the same orthodontist in San Mateo and I sabotaged one of his visits just to meet him and shake his hand. He was incredibly gracious to me that day as a young boy. And I never forgot the impact he made on me as all of our heroes do.” 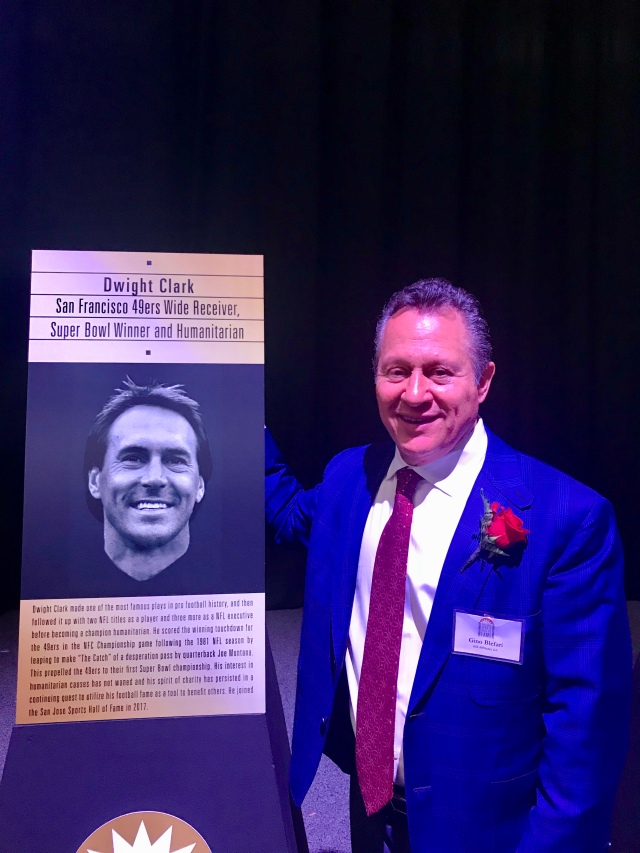 In every ode, the central theme was that no matter what, Dwight was a true team player. Being a real leader isn’t about just telling everyone how you’ll lead the way; it’s about the actions you deploy during those tough times when the weight of an entire football team is on your back and you must still somehow leap up, move forward and figure out a way to take hold of the win.

In fact, writing for our Berkshire Hathaway HomeServices blog, Dwight once explained his own philosophy on leadership: “When I reflect on my career playing with the San Francisco 49ers, one word comes to mind: fortunate. And fortune, as I define it, is the place where preparation meets opportunity. If you think about your life’s most extraordinary feats—whether it’s winning Super Bowls or winning in business—yes, there’s always some measure of luck involved but there’s also a whole lot of hard training, planning and hard work that has to happen long before luck arrives. Then, if you’re fully prepared at the exact moment luck finally does ring, you can pick up the phone and answer its call.” 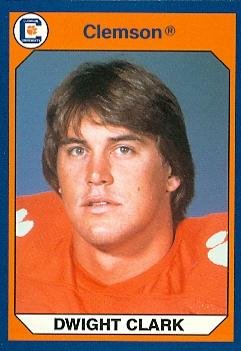 Of course, Dwight references the fateful day at Clemson University when he received one very important call. Back then joining the NFL was just a lifelong, though uncertain dream for Dwight. He didn’t have the statistics—he only caught 11 passes his senior year and had a total of 33 receptions during his four years as wide receiver for the Tigers—but what he lacked in stats he made up for with grit.

Still, he was hopeful, and on this particular day was feeling optimistic as he headed out the door, clubs on  his back, for a round of golf. Suddenly, the phone rang and his first thought was – “Better not get that. It’s probably someone who wants me to do something and then if I do it, I’ll never play golf today.”

His second thought: “What if the call is for Steve?”

Dwight was living with Clemson quarterback (and ACC Offensive Player of the Year) Steve Fuller, who would be a top choice for the upcoming NFL draft.

Dwight picked up the phone and yes, it was for Steve. On the other end, legendary 49ers coach Bill Walsh said hello then unexpectedly invited Dwight to join Steve’s workout to run routes and catch Steve’s passes so Bill could better evaluate him. During the session, Steve had a tough day but Dwight caught everything … including Bill’s attention. When the NFL draft took place weeks later, Dwight was drafted by Bill in the 10th round. (If you want the numbers for his nine-year career in the NFL here they are: Dwight had 48 career touchdowns, 6,750 yards and 506 catches, including The Catch.)

In his post, Dwight described the start of his career as “the ultimate meeting between opportunity and preparation.” He also wrote, “I know this tale could’ve had a very different ending if I hadn’t spent years running drills, if I hadn’t practiced all those long hours, if I hadn’t worked my hardest on the field each and every day. Because if none of that ever happened, the phone call would have meant nothing. But I did and it did, turning a dream once thought out of my reach into something that could fall right into my hands.” 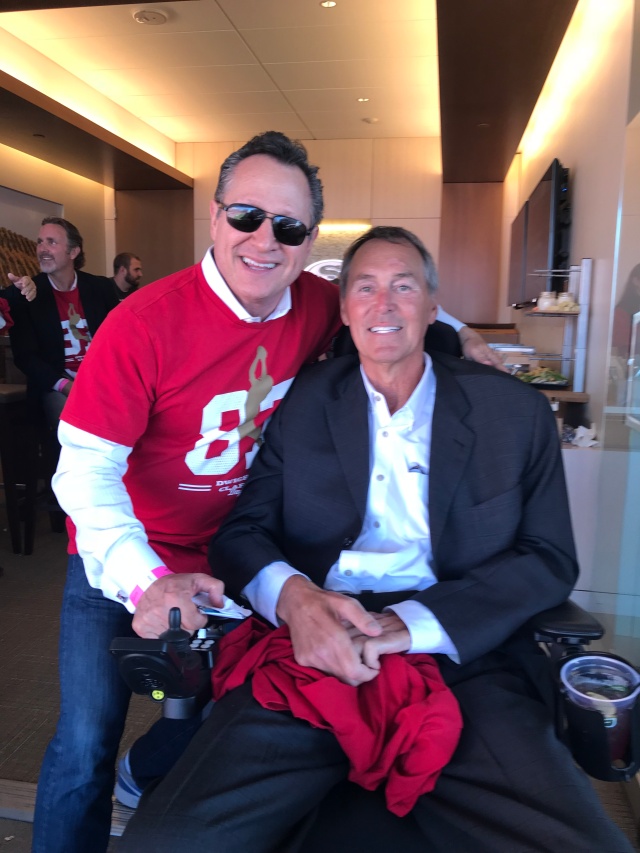 So, what’s the message? For me, it’s something Dwight said years ago when we were watching the 49ers play the Baltimore Ravens during Super Bowl XLVII. With 2:39 left in game, the 49ers had a first and goal at Baltimore’s seven-yard line, driving to win the game. After a running play gained two yards, the 49ers ran the clock to the two-minute warning. From there, three consecutive passes to receiver Michael Crabtree fell incomplete. At that time, I looked at Dwight in disappointment and said, “Boy, if he could’ve only gotten open.” To which Dwight replied without any hesitation, “When it’s the Super Bowl, you find a way to get open. Bill Walsh always told us, ‘All competitors find a way to win.’”

Isn’t that the truth?

Dwight, I can’t say you lost your battle with ALS because that would mean you aren’t a true competitor and you are a competitor in every sense of the word. I can only say that reading all the heartfelt tributes posted in your honor, watching my phone explode for days with hundreds of text messages, Facebook notifications and calls from those whose lives you continue to inspire, and witnessing how an entire country is now in mourning for a football legend and an even greater human being, it’s evident that even as life was taken from your grasp, you still found a way to win.

11 responses to Thoughts on Leadership: A Tribute to My Pal Dwight Clark